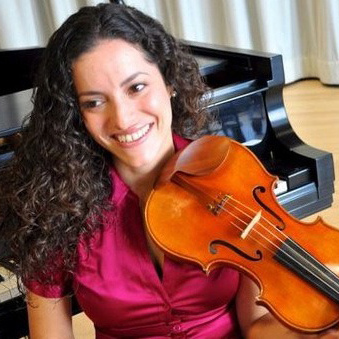 Venezuelan violinist, Marielisa Alvarez is a graduate of “El Sistema”, the National System of Youth and Children Orchestras of Venezuela. During her time in Venezuela she performed in several orchestras, including the Barquisimeto Youth Orchestra, the National Youth Orchestra of Venezuela and the Lara Symphony Orchestra. In addition she was featured as a soloist with orchestras and recitals organized by the Latin American Violin Academy.

Marielisa co-founded and co-directs the Boston String Academy, an El Sistema-inspired program which hosts an outstanding children’s string orchestra curriculum serving inner-city children from the Boston area. She is also faculty at Longy School of Music of Bard College and its Sistema Side by Side Series. She has been a guest speaker at Harvard University, New England Conservatory, Longy School of Music, Day to Aspire String Teacher Workshop in Boston, among others. Recently, in the Spring of 2016, Marielisa was chosen among the 100 most influential people for the Hispanic community in Massachusetts. This is an outstanding recognition from El Planeta’s Powermeter event.

Ms. Alvarez continues to collaborate with Venezuela by teaching in its different nucleos and summer festivals. She also collaborates with other El Sistema-inspired programs in the U.S. and abroad. In the summer of 2016, she was invited to work with the National Take a Stand Festival, the first national youth orchestra of El Sistema-inspired programs in the United States. Marielisa holds a Master of Music Degree and a Graduate Performance Diploma from The Boston Conservatory.