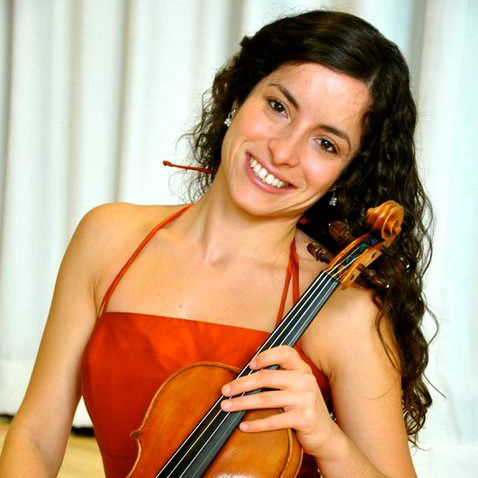 Violinist Mariesther Alvarez is a founder and co-director of the Boston String Academy, an El Sistema- inspired program which hosts an outstanding children’s string orchestra curriculum.

She holds a Master of Music Degree and a Graduate Performance Diploma from The Boston Conservatory, where she was a student of Professor Rictor Noren. Previous violin instructors include Sophie Vilker, Francisco Diaz, and Jose Francisco Del Castillo. A native of Venezuela, Mariesther is a graduate of ”El Sistema”, the National System of Youth and Children Orchestras. In Venezuela, she was a member of the Lara Symphony Orchestra and the National Youth Orchestra of Venezuela. She also performed as a soloist and chamber musician at several festivals organized by the Latin American Violin Academy.

Mariesther has attended a number of international festivals including the Kuhmo Chamber Music Festival, and the Liminka International Music Course in Finland; Prelude Music Academy in Wisconsin and Argentina; the summer violin courses provided by the Latin American Violin Academy in Venezuela. She has had the privilege of working with numerous internationally acclaimed artists, such as Gustavo Dudamel, Giuseppe Sinopoli, Pamela Frank, Joseph Silverstein, Mela Tenenbaum, and the Berlin Philharmonic String Quartet. Mariesther applies a unique pedagogical approach combining different methods and techniques from her own training at El Sistema in Venezuela, studies with Rictor Noren at the Boston Conservatory, the period of study with Mimi Zweig at the String Academy of Indiana University, and with the founder of the Colourstrings method, Geza Szilvay in Hungary and Finland. In the Spring of 2016, she was chosen among the 100 most influential people for the Hispanic community in Massachusetts. This is an outstanding recognition from El Planeta’s Powermeter event.

Ms. Alvarez is currently faculty Longy School of Music of Bard College and its Sistema Side by Side Series. She collaborates regularly with El Sistema in Venezuela teaching at the different nucleos and Summer Festivals. She also has collaborated with el Sistema inspired programs in Mexico and the U.S. such as Play on Philly!, Atlanta Music Project, Miami Music Project, Bravo Youth Orchestras in Portland, OR, Youth Orchestra of Losa Angeles, and Kids 4 Harmony in Pittsfield, MA. She has been invited for two consecutive years by the Los Angeles Philharmonic, as violin faculty for their “National Take a Stand Festival”, the first national youth orchestra of El Sistema-inspired programs in the United States.